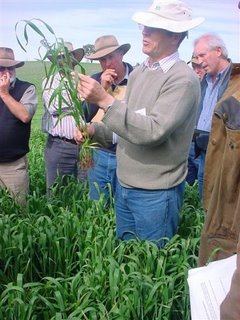 Dr Maarten Stapper – Maarten.Stapper@csiro.au – is a farming systems agronomist with CSIRO Plant Industry. He has lived, studied and worked in the Netherlands, Canada, USA, Iraq, Syria, and since 1982 in Australia. Maarten has an agricultural engineering degree in agriculture and catchment management in the semi-arid tropics, and a PhD in wheat production systems, linking crop physiology with agronomy and daily weather in simulation modeling. Quantifying production in dryland and irrigation wheat paddocks in southeastern Australia made him aware that most problems start with the soil, and thus solutions should commence there. Maarten is passionate about discovering and using the power of nature in food production systems – and the connections between soil biology, soil health, and the overall functioning of agro-ecosystems, and sees many opportunities for Australian agriculture to reverse soil degradation and regenerate soils. This feature in the CSIRO Sustainability Network Update (http://www.bml.csiro.au/susnetnl/netwl61E.pdf) is adapted from a presentation to the 3rd National Organic Conference of the Organic Federation of Australia (OFA) in Sydney July this year.

In a nutshell: Soil fertility is the capacity to receive, store and transmit energy to support plant growth. These processes require healthy soils – living, self-organising systems with physical, chemical and biological components all functioning and in balance. Continuous use of acidic or salty synthetic fertilisers, insecticides, fungicides and herbicides disrupts this delicate balance. Organic Farming has recognised this, but needs to follow its leaders to active soil fertility management. Carbon, in particular, is of critical importance and needs to be maximised through capture with solar energy through photosynthesis by green plants, and optimum storage and use in the soil. Before we can hope to improve systems, however, we need to understand (1) why they are the way they are, and then (2) how science and practice can help to actively manage soil biology to improve and maintain soil fertility, and achieve more sustainable, healthy and productive farming systems – even on our fragile Australian soils in a highly variable and changing climate.

References (NB. All internet references are to their July 2006 content)